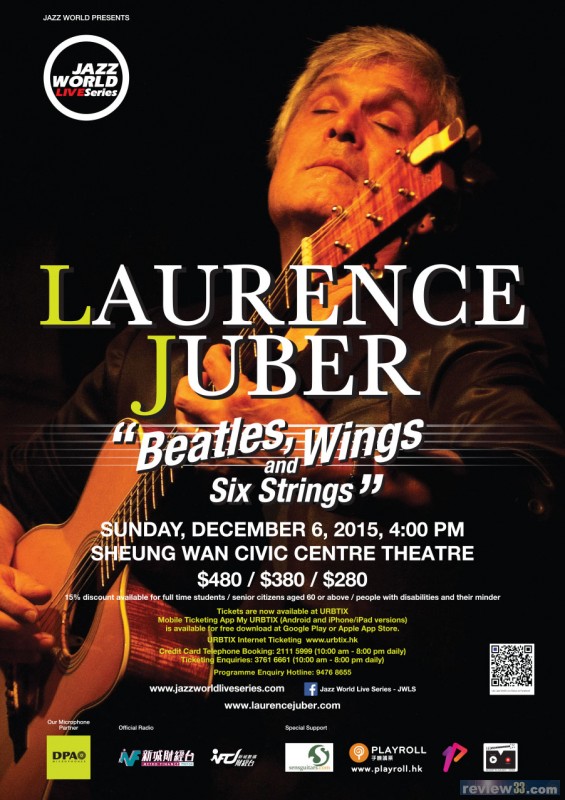 For Immediate Release through December 6, 2015

HONG KONG : JAZZ WORLDis delighted to announce two time Grammy Award winner, guitarist extraordinaire and maestro LAURENCE JUBER for a performance at the Sheung Wan Civic Centre Theatre on Sunday, December 6, 2015. Tickets are $280, $380 and $480 and are available from URBTIXNOW.  Please note, this will be an afternoon show and will start at 4.00 pm.

Laurence Juber has been playing guitar for nearly 40 years, and was the lead guitarist in Paul McCartney's band, Wings between 1978 and 1981, winning a "Best Rock Instrumental" Grammy for the song, "Rockestra". However, Laurence, best known to his fans as "L J", has since established himself as an artist in his own right, and has released several acoustic guitar instrumental CD's, all featuring his unique fingerstyle technique and extensive use of alternate tunings.

L J tours extensively in support of his 2 dozen solo CDs with concert and clinic dates in the United States, Europe and Asia. He also enjoys continued success as a studio guitarist. He has worked on scores of television shows, (including Home Improvement, Boy Meets World, and 7th Heaven), films (the 'Academy Award' - winning Good Will Hunting, Dirty Dancing and Pocahontas), and record albums (including Ringo Starr, Alan Parsons, Paul Williams, Al Stewart, Belinda Carlisle, The Monkees, and Lou Rawls).

Juber with his wife, Hope, have composed the score to 'Gilligan's Island, the Musical', and produced to rave reviews in Los Angeles. His 'Magellan Suite' for Guitar and String Quartet is a musical highlight of the 'Disney Sea' theme park in Tokyo, Japan.

In 2014, he released the book, Guitar With Wings: A Photographic Memoir, in which he looks back on his days working with an ex-Beatles in one of the '70s biggest bands.

Be sure to catch L J, one of the world’s best fingerstyle guitarists, play The Beatles, Wings and many other tunes, in the intimate surroundings of the Sheung Wan Civic Centre Theatre on December 6. This will be a Sunday afternoon show beginning 4.00 pm.

Video of L J playing “While My Guitar Gently Weeps