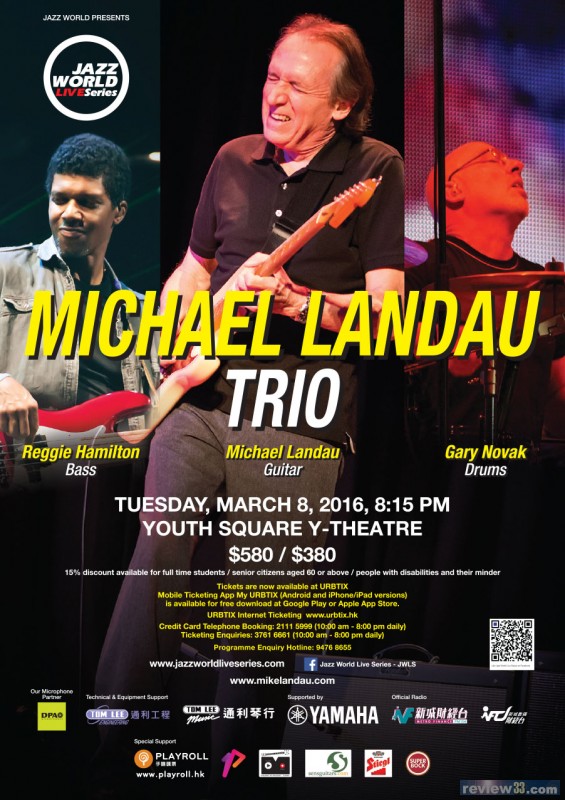 For Immediate Release through March 8, 2016

HONG KONG:  Jazz World Live Series is delighted to presentMichael Landau Trio on Tuesday, March 8, 2016 at Youth Square Y-Theatre. Tickets are $380 and $580 and available through URBTIX now.  The concert will begin at 8.15 pm.

Musician and composer Michael Landau was born and raised in Los Angeles.

He grew up with the music of The Beatles, Jimi Hendrix, Led Zeppelin, Cream and The Band.

In his early teens, Michael quickly became very interested in jazz and electric jazz music. Weather Report, Pat Martino and Jaco Pastorius were some of his early obsessions. From this diverse blend of influence, his sound and path began to take shape. His current group focuses on the improvisation and spontaneity of live shows.

Michael starting playing the guitar at age 11. By 16, he began playing the L.A. club scene with an R&B band and shortly after, he toured the West Coast with Robben Ford which

At 19, he joined Boz Scaggs for a world tour and by 20, he started to do session work on the recommendation of long time friend, Steve Lukather. Some session highlights would include Pink Floyd, Miles Davis, Joni Mitchell, BB King, James Taylor, Ray Charles and Rod Stewart.

In 1993, he won the Reader’s Poll for Best Studio Guitarist in Guitar Player Magazine.

Over the last two decades, Michael has found time between sessions to release a stream of solo recordings. His latest, Organic Instrumentals, combines the guitarist’s distinctive brand of Strat strangling with the modern organ sounds of Larry Goldings to produce ten tunes ranging from the Howlin’ Wolf style blues “Wooly Mammoth” to the Bill Frisell-like introspection of “The Family Tree.” These disparate feels are knit together by Landau’s personal harmonic sense and intensely focused attention on the details of tone.

for more information on Michael Landau and his music.

Jazz World wishes to thank dpa microphones, Tom Lee Music, Playroll, Metro Radio and Music In Music, without whom, this concert  would not be possible.